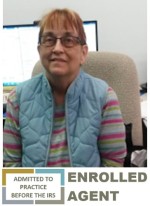 After 20 years working as a seasonal tax preparer for Action Accounting, Bohl Associates, Inc and most recently AgStar Financial Services, Carolyn took a giant step and launched Snyder Tax Service in late 2009.   She rented space in Miner Plaza in downtown Ladysmith and opened for business.

Carolyn passed the series of tests to become an Enrolled Agent (EA) in 2011.  An Enrolled Agent is authorized by the US Department of the Treasury to represent tax clients before the IRS.  EA status is recognized in all 50 states.

Her personal life has included growing up on a dairy farm and marrying Richard – a non-farmer who became a dairyman proudly raising registered Holsteins under the prefix Star Valley.  They raised two daughters, a son, and two granddaughters. Family activities included cattle showing much of the summer season.  The herd was dispersed in 2013.   Her son and his wife still live on the farm – though they both have off-farm jobs.  Richard and Carolyn have a total of eight grandchildren and nine great-grandchildren.  Sadly, Richard passed away in 2015 following a lengthy illness.  Currently Carolyn still lives on the farm near Weyerhaeuser.

Carolyn has been involved with Habitat for Humanity in Rusk County since 2004 when she helped form the local affiliate.  She served as treasurer for  Wild Rivers Habitat for Humanity which serves Burnett, Polk, Rusk and Washburn Counties.  She was on the original board of directors for Rusk County Community Foundation and was a 4-H leader for more than 30 years – actively involved at the regional and county level.  She served as Fair Secretary for five years which included a year on the state board. 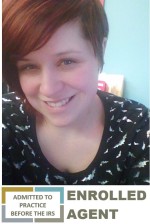 Amanda graduated with a BS in Sociology and Criminal Justice from UW-La Crosse then ventured on to UW-Milwaukee to complete a MA in Sociology with an emphasis in statistical analysis.  She worked as a teaching assistant, research assistant, and instructor before moving back to the area and taking an administrative position at the WITC-Ladysmith Outreach Center.  In addition to providing administrative, tutoring, and proctoring services to students, Amanda taught classes in social media, resume writing, Microsoft Office, and other computer-based technologies.

Amanda began her tax-prep career in 2011 – completing an Income Tax course and taking a seasonal position with Snyder Tax Service.  Around the same time, Amanda also worked at the Greater Ladysmith Area Chamber of Commerce.  Due the growth of Snyder Tax Service and a greater need of her skills, she left that position to fulfill bigger roles at Snyder Tax Service.  Amanda completed the process of becoming an Enrolled Agent (EA) and is authorized by the US Department of the Treasury to represent tax clients before the IRS.  EA status is recognized in all 50 states.

Amanda recently obtained her RSSA (or Registered Social Seciety Analyst) credential. This means Amanda has the knowledge and technology to assist clients with questions regarding social security (from planning to determining social security benefits to applying and obtaining earning records) and general Medicare rules.

In her rare free time, Amanda loves learning, reading, and spending time with her family – particularly her nephew and niece, Owen and Rhylin.   Amanda is married to her husband, Jason, and has four children – two step-daughters, Alexia and Briella, a daughter, Kinsley, and a son, Grayson.  The kids often help out at the office, so don’t be surprised to see them when you stop by. 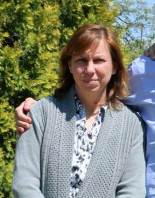 Kris started at UW-River Falls in the Pre-Vet program.  When she graduated in the fall of 1989, she had a BS in Biology with a Chemistry minor.  She met her husband, Rick, while at college and moved to Weyerhaeuser to live with him and learn farming.  They were married in 1992 and have two children.

When the kids got older, Kris wanted something to fill in the long winter hours.  Carolyn suggested she help her at the tax office and she enjoyed the challenge.  It definitely made the winter months go by fast!

After the cows were sold in the spring of 2013, Kris took a full time job working as the office manager for a feed mill in Bloomer.  She still works weekends and when ever else she can fit in time at the tax office.

When Kris is not working, she enjoys gardening, movies, and reading. 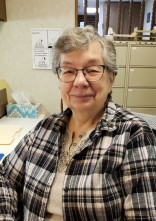 Cindy grew up on a farm near Glen Flora and has lived in this community most of her life.  Cindy and her husband, Dan LaPorte, Sr., now live on the Howard home farm north of Glen Flora where they raised beef cattle.  They have three children and nine grandchildren.

Cindy graduated from the Flambeau High School and then attended UW-Stout for her Bachelor’s degree in Home Economics Education.  Later she received a Master’s degree from UW-Eau Claire in Education – Professional Development.  Cindy taught in the Union Grove School District for four years before she and her family moved to a farm near Tony, WI.  Cindy taught at the first Alternative School in Rusk County called the BIG MAC program from 1993-1998.  Later, Cindy became the 4-H Youth Development Agent in Rusk County in Rusk County from 1999-2006.

Community involvements for Cindy include the 4-H program from childhood right on through various levels to 4-H agent.  Today she enjoys judging various projects at local fairs.  Cindy has also been involved with a local Homemakers Club, Habitat for Humanity, and served on the Rusk County Board for two years.

Jason was born and raised in the Ladysmith area – graduating from Flambeau High School and later from WITC with degrees in Business Management and Leadership Development.  In 2004, Jason began working at Jeld Wen, and he has continued to work there for the past 15 years.  Jason recently accepted the job of Production Planning Lead and made the transition to an office job.

Jason began his work with income taxes in 2018.  Snyder Tax Service presented him an opportunity to assist with some data entry, and Jason quickly learned that he was interested in learning more.  Jason has been gaining more knowledge and becoming more familiar with income tax law.  He continues to work on new things and provide more seasonal help.

Jason is a huge Detroit Lions fan!  He also enjoys hunting, fishing, and spending time with family.  He likes to play golf, horseshoes, pool, and softball.

If you received a letter from the IRS or the state of Wisconsin, please make that letter available to us as soon as possible.  Letters can be dropped off or mailed.